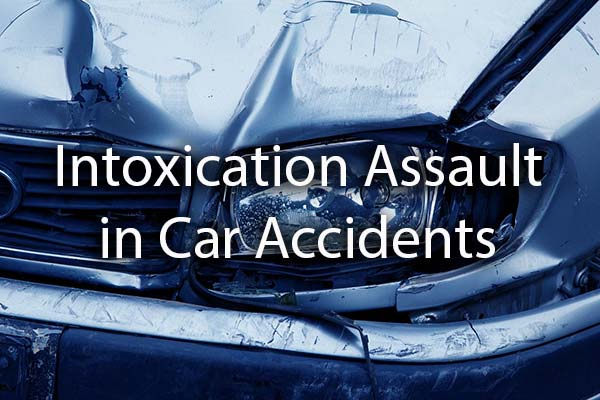 Drinking and driving is a dangerous decision. Alcohol slows down an individual’s reflexes, affects an individual’s reasoning, and inhibits an individual’s ability to focus. When someone decides to drive home after drinking, they are not only putting their own lives at risk but the lives of others on the road. If they were to get into an accident, they could be charged with a DWI. If the occupants of the other car were injured, they could be facing an intoxication assault charge.

What Is Intoxication Assault?

The Texas Penal Code section 49.07 defines intoxication assault as an accident resulting in the serious injury of another caused by the operation of a vehicle on a public road by an individual who is impaired by alcohol or drug use. Unlike a DWI charge, intoxication assault is only charged when an occupant of either vehicle sustained life-altering injuries. This could mean that the individual(s) suffered permanent disfigurement, paralysis, a traumatic brain injury, or had a bodily part or organ damaged to the point where its function is either severely hindered or completely stopped.

An individual can be charged with both a DWI and an intoxication assault for the same accident.

How Is an Intoxication Assault or DWI Determined?

Car accidents can elicit strong emotional responses from the individuals involved. This can make it difficult to determine whether an individual was intoxicated while they were driving. Because of this, individuals who are suspected of being intoxicated while driving are required to take a breath or blood test to determine alcohol or drug content levels. Refusal or failure to do so may result in serious charges and loss of their driver’s license.

These tests are often done on the spot or immediately after the accident once the driver and other individuals’ injuries are properly taken care of.

Is An Intoxication Assault Considered a Felony?

Intoxication assaults are taken very seriously in the state of Texas and are considered a third-degree felony. However, depending on the seriousness of the accident, this charge can be escalated to a second-degree felony.

What Causes an Intoxication Assault to Result in a Second Degree Felony?

A second-degree felony will be charged when the offense caused the injured individual/individuals to enter a vegetative state, or if the victim was a peace officer, firefighter, or emergency medical personnel acting in the line of duty.

What Are the Consequences of an Intoxication Assault?

An intoxication assault often results in 2-10 years of jail time as well as a fine of up to $10,000. If the individual was charged with a second-degree felony, they could expect to receive a prison sentence from 2-20 years along with a fine of $10,000.

A first offense will also result in an individual’s license being suspended for 90 days or a year. If it is their second offense, that suspension can be up to two years.

Individuals charged with intoxication assault can also face the following;

Justice for the Victim

It’s not just the driver who will have their life altered due to their careless actions. The victims of these careless crimes will never be the same. High medical costs, missed time from work, emotional damage, and lost enjoyment in life can take a huge toll on not only the victim but their families. Hernandez Law Group, P.C. is dedicated to ensuring these individuals get the compensation they deserve for damages and medical expenses. Our law firm is a no-win, no-fee firm, ensuring that our clients are protected from the risks that can come from seeking compensation. Contact our team today to schedule a free no-obligation consultation.