Skip to content
Home  »  Car Accidents   »   Who’s at Fault in a Multi-Vehicle Pileup? 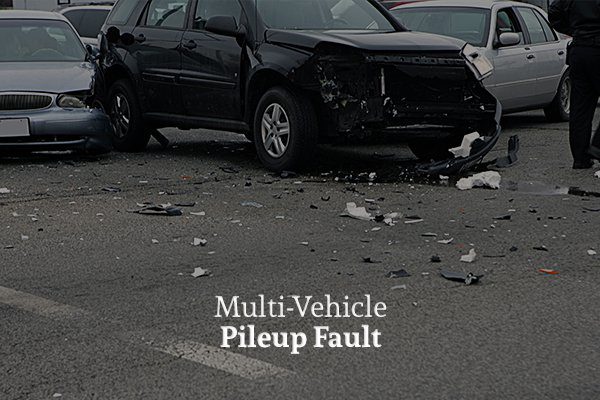 In addition to the dramatic pileups that make the evening news, smaller accidents involving three, four, or five cars happen across the state of Texas every day. Because many vehicles are involved in these accidents, establishing fault is tricky.

If you are wondering who might be at fault for your multi-vehicle pileup, this guide from the car accident attorneys at the Hernandez Law Group, P.C. can help.

Determining the Details of the Chain-Reaction Car Crash

With so many variables at play, chain-reaction accidents are complicated. In most rear-end collisions, the driver of the car that slams into the back of another vehicle is at fault. In a multi-vehicle pileup, however, any driver can be at fault. In fact, more than one driver is often held accountable.

To establish fault, investigators must look at the details of the crash and how each impact happened. For example, if a vehicle stops on the road and causes the three cars behind it to slam into each other, those drivers may be held responsible for following too closely.

If a stopped car is hit and pushed into another car in front of it, the driver of that car will likely not be at fault because they didn’t contribute to the accident.

Role of Negligence in Establishing Fault

To establish fault for a multi-vehicle pileup, investigators will try to determine the negligent party. Negligence is defined as the failure to exercise the care that a reasonable or prudent person would in the same circumstances. These are the most common negligent actions that lead to multi-vehicle car accidents:

Establishing negligence is important when determining fault in a pileup. For this reason, it is often a matter of great scrutiny and debate.

Other Factors That Increase the Risk of a Multi-Car Pileup

Only a perfect storm creates a massive pileup, so several drivers may be at fault. When this happens, attorneys and insurance agents determine—and sometimes fight over—the fault of each individual. It may be determined that one driver is 70 percent at fault and another only 30 percent depending on the role each played in causing the accident.

There is no limit on the number of drivers that can share fault. In some cases, every driver involved may carry some of the blame.

Determining Liability in a Multi-Vehicle Accident

There are three main ways that states determine who should be held accountable for paying damages after an accident:

Texas uses the principle of modified comparative negligence, which means you must be under the 50 percent threshold to recoup your losses from another driver.

Have You Been Involved in a Multi-Car Pileup?

If you have been injured in a multi-vehicle pileup, you need Juan Hernandez—a Texas board-certified personal injury attorney—on your side. Only two percent of Texas attorneys have this certification. Contact the dedicated car accident team at the Hernandez Law Group for more information about how we can help with your case or schedule a free no-obligation consultation.