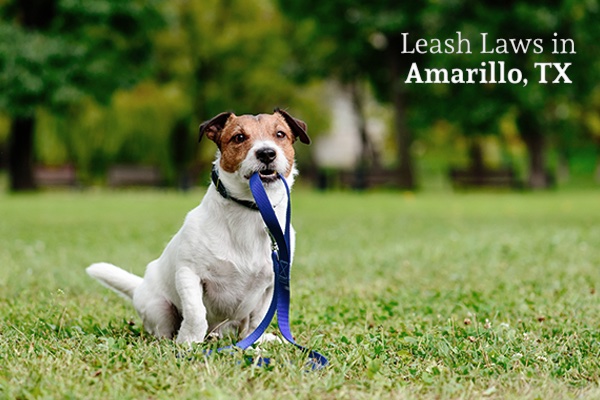 The city of Amarillo passed its own leash laws to help decrease the number of accidents involving dog bites. This was done in an effort to improve public health and safety. These were the following laws that were passed and are still in effect today:

Responsibility for the Dog

Under Amarillo’s leash laws, anyone who owns, keeps, controls, feeds, shelters, or is aiding a dog must have the dog in question on a leash when in public. This includes someone who is pet sitting, a dog walker, and even animal control officers. If you are aiding an injured dog and do not have a leash, then you may keep the animal confined – either in a crate or a vehicle – to follow the law. If the dog is on private property, the law mandates that the dog must be kept within an enclosure, such as a fenced-in yard.

Dog as a Public Nuisance

It is against the law in Amarillo, Texas to allow your dog to roam freely within an unfenced yard or a neighborhood. A dog that is roaming freely is considered a public nuisance. The dog must be restrained by a leash when out in public, and the owner should be able to restrain the dog in a matter of seconds. If you have an electric fence in your front yard, you are fine as long as the dog actually stays within the fence’s boundaries. If the dog has gotten used to the shock and wanders beyond the fence, then you are responsible for the actions of the dog afterward.

The city government of Amarillo understands that dogs can be used for a variety of different helpful actions or events. This can either be for the public good – such as for law enforcement – or for entertainment – such as for dog shows. The city of Amarillo lists the following conditions as exceptions its leash laws:

However, the owner of the dog during these events is still held responsible for the dog’s actions.

If you have suffered a bite from a dog due to the owner’s negligence, you may be eligible for monetary compensation for medical expenses and damages. The dedicated attorneys at Hernandez Law Group can help you claim the compensation you deserve. Juan Hernandez is one of the 2% of personal injury attorneys in the state of Texas to be Texas Board Certified in personal injury law. Contact Hernandez Law Group, P.C. today for a consultation.