Skip to content
Home  »  Premises Liability   »   Crushed By Crowds; Concerts Can Be Dangerous 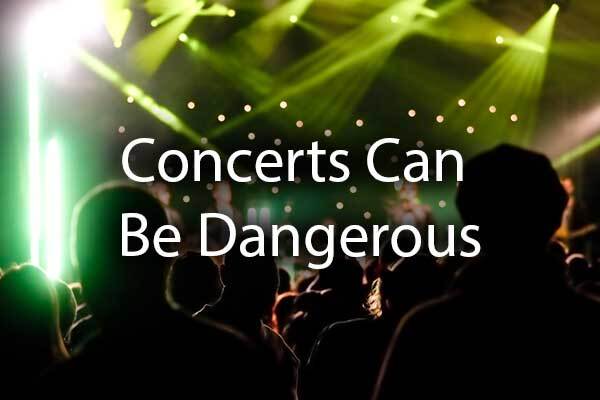 Concerts are thrilling and exciting! The hype music, thousands of screaming fans, and being with friends make for a great time, though it’s important to remain vigilant. Steps are made at concerts to ensure the safety of the musicians, fans, and staff working the event, but one must recognize and understand the dangers that are present at concerts. Avoid accidents and keep yourself safe.

Out of 970 people that were surveyed after a live music event, 57.4% admitted to using drugs or alcohol during the event. Out of the 57.4%, this was the breakdown of usage:

Alcohol and substance abuse disrupts normal brain function and can make it more difficult to make rational choices in behavior. This can put the individual or those around them in danger of reckless behavior or accidents. For example:

Alcohol can lead to poor decision making and delayed reactions making it difficult for an individual to get behind the wheel of a car after the concert. The individual could get into a serious accident either on the event grounds or on his or her way home from the event. For some individuals, alcohol may alter behavior, leading to violence or fights.

Illegal Substances are common at concerts. Individuals partaking in drug use may find their behavior becoming unpredictable, violent, or suffering from hallucinogens. Others may become sluggish and tired, making them prime suspects for sexual assaults or theft. Regardless, some individuals may have respiratory issues or heart failure as a result of the substances they have taken, and may not be able to readily get the help they need at the music event.

There are bands and musical groups that are known for their incredible out-of-this-world performances. Stunts on and off the stage can be dangerous if not planned or operated correctly. Some examples of risky or reckless stunts that have caused injury in the past are as follows:

Crowd Jumping/Surfing: In 2012, Sonny Moore from the band Skrillex, leaped off of the stage and into a crowd of fans, landing on top of fan Jennifer Fraissi, which led to serious brain injuries resulting in a stroke.

Dangerous Stunts and Tricks: Fireworks and projectiles can potentially hurt the musician or the fans, and these stunts and tricks need to be properly planned and orchestrated. For example, in 2003, a fire broke out during the Great White concert due to a malfunction with the pyrotechnics used in the show.

Moshing: This term is used to describe the shoving and pushing by individuals in the pit (the front stage) to get closer to the performers.

Stage Diving: Extremely dangerous behavior where a fan climbs onto the stage and jumps off into the crowd.

How Can I Keep Myself Safe at Concerts?

Knowing how to keep yourself and your family safe at concerts can help you avoid a serious accident and injuries. Here are some helpful tips to enjoy the tunes and the excitement without getting caught in an accident:

What If I Have Been Injured in a Concert Accident?

If you were injured at a concert, you may be entitled to monetary compensation for damages and medical expenses. If the concert venue, staff, or musicians were negligent in their conduct and created an unsafe environment that led to your injuries, you can file a personal injury lawsuit under premises liability and/or the negligent activity theory. The dedicated attorneys at the Hernandez Law Group, P.C. is more than willing to take your case and help you claim the compensation you deserve! Contact us today to schedule a free no-obligation consultation.