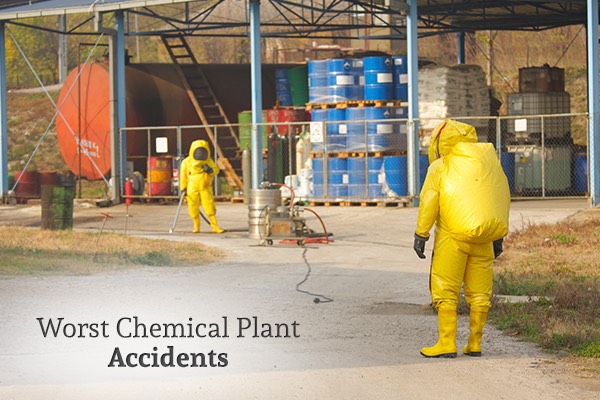 When the United States went through the Industrial Revolution, its citizens and factory owners had no idea the magnitude of change this would bring. New products, new ways of using and producing energy, and major technological advancements took the country and the world by storm. With the increased demand for energy, power plants and chemical plants were quickly constructed and required to work hard. To meet quotas, these plants often cut corners and put their workers at risk. This sometimes led to terrible chemical plant disasters. Here are the three worst chemical plant accidents in United States history:

On February 3, 1971, a chemical plant operated by Thiokol Chemical caught on fire and exploded in Woodbine, Georgia. The facility had more than 35 buildings and took up over 7,400 acres. Eighty people were working at the plant on this fateful day, and they were unaware of the danger they were in.

In building M-132, a poor chemical reaction caused a spark. The spark quickly turned into flames as it came into contact with gasses from the other chemicals. The fire made it onto a conveyor belt that led out of the room, thus spreading the flames to other parts of the building. An evacuation of the facility was quickly called into action. All 80 workers made it safely out of the facility, but they, unfortunately, did not leave the general area.

When the fire reached the plant’s storage room, a massive explosion occurred. Twenty-four people died instantly, and another five employees would die later due to their serious injuries. Fifty other employees suffered life-altering injuries.

October 23, 1989, was a day of disaster for the employees of Phillips Petroleum Houston Chemical Complex Facility in Pasadena, Tx. This facility was built to create high-density polyethylene, which is an extremely flammable material used in creating plastic bottles. The accident happened during a routine maintenance check at the plant. The air connection that opens and closes the valves was reversed, releasing 85,000 pounds of flammable gas. The gas traveled quickly throughout the plant, and within two minutes of the valves being reversed, it came into contact with an ignition source and exploded. The resulting fire traveled to a storage tank about 10-15 minutes later, thus causing it to explode as well. This second large explosion was followed by smaller ones.

The explosions throughout the plant led to quakes which registered at a 3.5 on the Richter scale. The resulting fires took ten hours for firefighters to bring it back under control, but the damage had already been done. The blast killed 23 employees and injured 315 people. It was one of the worst industrial accidents in Texas history.

A chemical plant owned by Angus Chemical of Northbrook, operated under IMC Fertilizer, exploded on May 1, 1991, in Sterlington, Louisiana. The explosion was the result of a fire that started within one of the storage buildings of the plant. It is still unclear what started the fire, but the consequences of it could be seen for miles. The initial explosion could also be heard 8 miles away from the plant. The explosion caused 500-600 nearby residents to be evacuated. The local area experienced major damage; windows of buildings were blown out, sidings were ripped away from homes, and vehicles were completely burned. Eight employees were killed at the plant, and 120 were injured.

Workplace accidents can put a victim and their family’s lives on hold. It is essential to know your rights and whether or not you can claim compensation for a workplace injury or wrongful death. If you or a loved one has been affected by a workplace accident, contact the personal injury attorneys at Hernandez Law Group. Juan Hernandez is one of the 2% of attorneys who are board-certified by the Texas Board of Legal Specialization to practice personal injury law. His expertise can help you claim the compensation you deserve. Call Hernandez Law Group today.