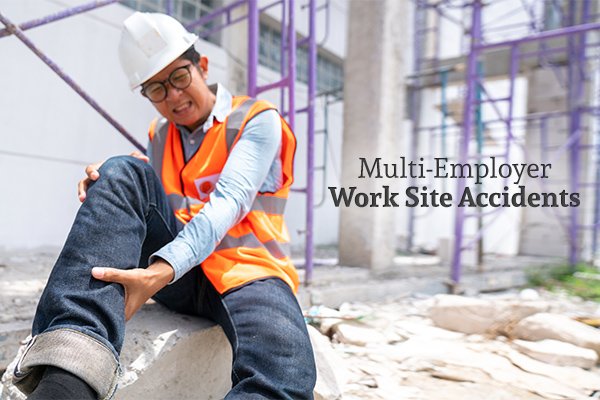 It’s an unavoidable fact of life that accidents will happen at the workplace. And when multiple contractors, subcontractors, and other supervisors are involved in the circumstances of the accident, determining liability can be tricky. Read on to learn more about some of the legal principles that govern worksite liability in Texas.

The federal Occupational Safety and Health Administration (OSHA) sets nationwide regulations for the safety and health standards in the workplace. If an employer allows an OSHA violation to go uncorrected and an employee is injured as a result, the employer may be subject to federal and state penalties in addition to owing damages to the injured person and their family. OSHA regulations are important for all workplaces, but especially construction and industrial worksites.

Just last year, the Fifth Circuit Court of Appeals (which has jurisdiction over Texas, Mississippi, and Louisiana) adopted OSHA’s “Multi-Employer Work Site Doctrine.” This doctrine dictates that any employers who exercise control over a work site are liable for violations against OSHA regulations, even if the employer doesn’t actually employ the injured worker.

Because many worksites have employees (or contractors) of multiple businesses onsite at the same time, it can be tough to enforce workplace safety laws for each individual business in the same location. But with the guidelines set forth by OSHA’s Multi-Employer Work Site Doctrine, general contractors in Texas may be responsible for multiple subcontractors or even outside parties, the question of whether an OSHA violation occurred becomes a highly fact-intensive one.

Going forward, each case will be decided based on the degree of the on-site supervisor’s control over the work site. Judgments will be based on whether or not the person in charge regularly inspected the work site to ensure that no violations went uncorrected, and whether they made timely responses to complaints or concerns raised by others.

General notions of due process require that an entity is only liable for issues it knew (or reasonably should have known) were present. In other words, proving that potential dangers were never reported to the correct authority may be enough for an employer to sidestep liability. This makes it incredibly important for workers to report dangerous conditions to their supervisor as soon as they can.

This adoption of the OSHA’s Multi-Employer Work Site Doctrine for the Fifth Circuit means that federal OSHA regulations now have some additional support. When contractors know that they’ll be civilly liable for all the OSHA violations on the work site – not just the ones that may impact their own workers – they’re more likely to take preventive and corrective measures to ensure the safety of all.

In addition to the federal protections under OSHA, Texas workers are also protected by state law doctrines. Even state employees can sue Texas in tort under the state Tort Claims Act. Employees who are injured, made ill, or killed on the work site may be able to sue the general contractor (and any other responsible parties) in state court under general civil tort laws.

But because workers’ compensation generally covers workplace injury claims, going outside this system and seeking additional damages will require you to prove that your work injury was not just an accident, but the clear result of grossly negligent and reckless behavior. This will usually require you to provide proof that the employer was made aware of dangerous conditions on multiple occasions but took no steps to remedy them. In some of the most egregious cases, an employer may be shown to have created dangerous conditions as a way to save money or finish a project more quickly.

Because assigning fault in these types of cases is a complicated process, plaintiffs will generally need to name as defendants just about every employer on the work site. While some employers may be dismissed as defendants if they can show they had no part in the circumstances that gave rise to the injury, failure to include them in the lawsuit on the front end can prevent a plaintiff from recovering all the damages to which they may otherwise be entitled.

When you need legal advice about a work site accident in the city of Dallas, look no further than Hernandez Law Group, P.C. Our skilled attorneys have years of experience litigating injury cases under Texas and federal law, and will provide you with the advice you need to make some important decisions about your future. Schedule a free, no-obligation consultation online. As one of only 2% of Texas attorneys who are board-certified in personal injury law, you can trust Hernandez Law Group to provide you with superior representation in work injury cases.