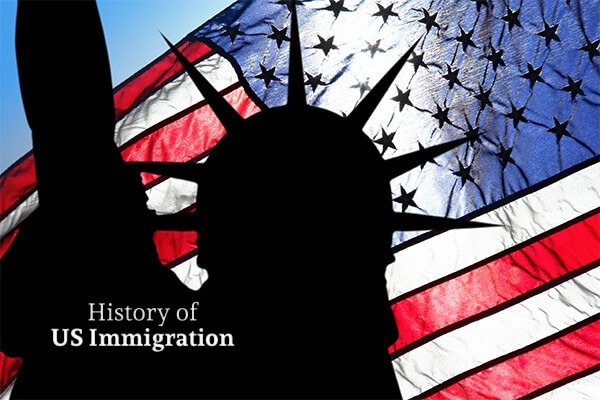 Immigration has played a huge part in the United State’s history and it continues to make headlines today. From new advancements in technology and the spread of new ideas to the introduction of new cultures and food and helping change the economy, immigrants have helped the United States grow and thrive. Last month, Hernandez Law Group celebrated the history of immigration by shedding light on major changes that occurred during the 1700s-1800s. This month, we seek to continue that celebration by focusing on immigration history from the 1900s – the present.

The Immigration Act was passed in 1917 and established that literacy was a requirement for immigrants entering the country. This was to help reduce the communication gap which had become an issue within the port cities and immigration stations. However, this act also had the adverse effect of halting many Asian immigrants from entering the country because Asian languages are drastically different from English, making the learning curve pretty steep.

May of 1924 saw the passing of the Immigration Act of 1924; this limited the number of immigrants allowed into the United States. It accomplished this by setting a yearly nationality quota. Visas for immigration were issued to 2% of the total number of people from each nationality already living in the United States. These numbers were based on the 1890 census. These numbers heavily favored northern and western European countries. Southern, central, and eastern Europe saw their immigration chances extremely limited and Asain immigrants were completely excluded.

The United States ended its origin quotas with the passing of the Immigration and Nationality Act in 1965. It radically changed the immigration system by replacing the quotas with a new 7 category preference system. These categories concerned family relations, what the immigrant could offer in terms of skill to the United States, and refugees from areas of violence.

In 2001, United States Democratic Senator Dick Durbin along with Republican Senator Orrin Hatch created the first development, relief, and education program for Alien Minors called the DREAM Act. This act would have put in place a legal pathway for the children of undocumented immigrants brought illegally by their parents to gain legal status and avoid deportation. This law and revisions of the law were shot down by the House and Senate and never came to pass.

President Barack Obama signed into effect the Deferred Action for Childhood Arrivals Act, also known as DACA, in 2012. This act temporarily halted the deportation of Dreamers from the United States. It did not, however, provide them a way to gain legal status within the country.

In 2017, President Donald Trump issued two executive orders. Both of these orders were known as, “Protecting the Nation from Foreign Terrorist Entry into the United States.” These orders were designed to limit the amount of travel and immigration from six majority Muslim countries. The countries included on this list are the following:

This order also included the countries of North Korea and Venezuela. These travel bans were quickly challenged by the Supreme Court, and they are still under ethical debate today.

In 2018, the travel restrictions on Chad were lifted, which created a crack in Donald Trump’s executive orders. The Supreme Court upheld the ban on the remaining countries, claiming that it was for the country’s security that these bans remain in effect.